OLD PERSON CONFESSION: I have never been to a music festival before. I always wanted to, you know, ten years ago when Big Day Out still looked remotely interesting but it has never worked out. Until, that is, last weekend.

Harvest was the first festival happening near me with a line up that I felt justified the expense. So rock, right?

First off, very exciting. Yes. We all piled in to Kate’s car and sang along loudly to various, sunny-day-we’re-going-to-Harvest tunes, languidly cutting our way through the spring air. So exciting, all the way to Werribee where it was exciting in a 45 minute long traffic jam (spicing up the traffic jam portion of the day up nicely was meeting a car full of young hippie folks and gratefully accepting mouthfuls of mango, proffered by one through the car windows. Young hippies were also gracious enough to lob handfuls of large and scratchy red glitter into the backseat, and to plaster some to Paul’s face after licking it. Bless). 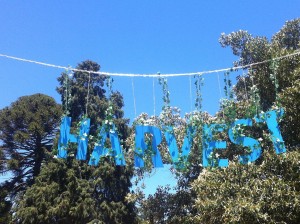 Harvest itself takes place in a super pretty and super large garden. They’d made good use of the space and there was whimsical decorations and performance spaces and delicacies galore which I had intended to like, thoroughly enjoy, and sprawl under and imbibe but after some wandering and a little art session, 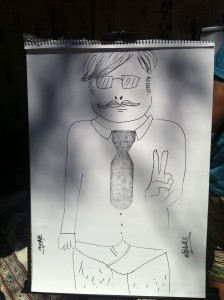 the Silversun Pickups were on, and like, you go see the Silversun Pickups. And then you know, you get ice cream and you try to sit for a bit but then Mike Patton is yelling in Italian. You don’t ignore that kind of thing. So you wander back to the Great Lawn along with hundreds of other nomadic, dirty footed, sunburnt crazies, but then after he’s jumped around a bit and made Italian pop songs seem just ridiculously edgy, you realise you’ve got fifteen minutes till Cake and you still need to find a toilet and fill your water bottle and pay a dollar to put more sunscreen on because direct sunlight man, what a bitch, and by the time you make your way to the Windmill stage you’re missing Love You Madly which is your favourite, by the way.

So I’m watching Cake, and having just the best time, partially aware that it would be better if I hadn’t misplaced all my friends- the last two on account of the involuntary run I broke into on hearing the aforementioned song, when I of course begin to quietly panic about Beirut, starting in fifteen minutes. I send around a few messages and after five minutes manage to track down three of my companions and we join the large migration spilling back onto the Great Lawn and find a spot to sit and wait. I am by now quite stressed. Several of my group I haven’t seen for a few bands now, and I am plagued by the feeling of disorganization that must haunt the parents of small children at all times.

Beirut are marvelous, I adore them and they are marvelous. They are, I think, a little lost on such a huge stage and their music is perhaps suited to a slightly different venue (SERIOUSLY, I ADORE YOU, BEIRUT) and so when after they had finished and I was continuing my resolute possession of the piece of lawn and my friend Josh found us and was fucking happy out of his mind on the amazing time he’d had at Cake I got a bit pissed off. Josh. Shut up about what a great day you’re having.

People were leaving the lawn for Ben Folds, but I refused. No. No more seeing half of bands and watching the time. No. I will sit here for hours, surrounded by banana peels, water bottles and pot smokers. I don’t care.

Soon though, I actually didn’t care because Beck obliging came out and rocked all of my socks off. So that was nice. I don’t usually dig on the mega-skinny white boy thing but, damn. That man. Damn. 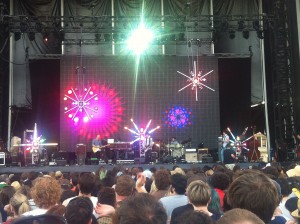 Then he left and I remained, parked on our bit of lawn dotted trash heap, aware in my viscera that Grizzly Bear were beginning to play somewhere tantalizingly close by. I just couldn’t do it. After constantly moving for the first two hours of being there, the only thing keeping me sane was my little patch of grass and forgetting everything else. 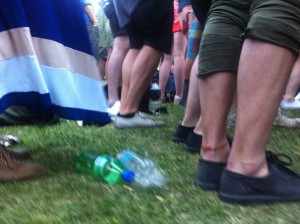 the magic lawn part we fiercely possessed and lots of legs

How, do people do these things with poise? How do you decide to watch one band that you love knowing that you’re missing another? How are you perched in trees and not stressed out of your mind about locating your similarly tanned friends and getting to some tent or other?

I don’t know if I like music festivals. Or at least not ones with a phat and tasty lineup. Too many treats and Carlynne gets cranky. Others blithely swan from stage to stage or sit in a giants bird’s nest between shows while I am tapping my invisible watch and internally screeching. I’ve always wanted to come to one of these, and I imagined myself bathed in the glow of all of my favourite music, and drinking in the sunlight and laughing with my friends but in reality THERE IS ALWAYS SOMEWHERE TO BE AND THE BEER IS CRAP AND SUN IS HOT, YOU GUYS.

In summation, I’m too old for this shit.

Lest you think it was a crappy old day, I will remind you that I saw the Siversun Pickups, Mike Patton, Cake, Beirut, Beck, and- Oh my goodness, Sigur ros*.

So, Cat Lady whining aside**, I saw some amazing bands, got a mango bite, and, not to be too tacky, may or may not have made my way with a couple friends into a backstage area where we may or may not have drank Moet with the string section of one of the bands and helped ourselves to said band’s leftover fruit and condiments. It wouldn’t do to name drop, but 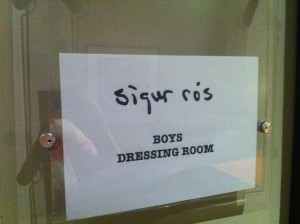 Maybe I’m not too bad at this after all…

*If you can, ever, in any way, using any means, please- see them live. You don’t understand. If you have ever wanted to go somewhere else, Narnia, Middle Earth, Neverland, whatever; do yourself a favour and watch this band. You go away, and you’re somewhere quiet and beautiful and cacophonous and dark and heavenly and you forget that you’ve been standing for six hours and that the group of four who graciously pushed their way immediately in front of you after the band started haven’t stopped talking the entire time, or, that you’ve ever had a real problem in your life.

** Not quite done yet: pot- I don’t like the smell of it. It could be an age thing, but I don’t think I ever have. And, maybe it’s just me but is it polite to spark up a doobie in close proximity to my very pregnant friend Amber? I don’t know if it is.

And speaking of polite, if you want to talk, go sit in the fucking birds nest and talk! Don’t waltz in late, nearly knock me down with your little back pack and have a chat about how much you love the band that you’re missing because you’re talking over them. “Sigur Ros, is my happy music. They sound sad, but they’re also like, happy? You know?”. Honestly. Point me to my armchair. 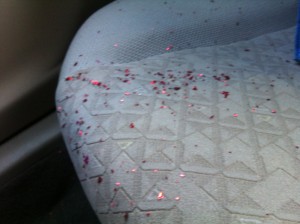