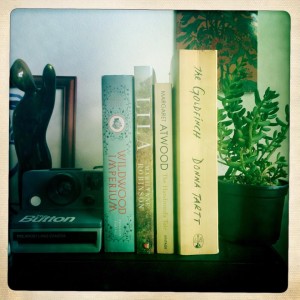 Yes, I have not blogged (what a horrible, pasty skinned verb that is) in like,1.5 years or some shit. Yes I’m just going to gloss right over the pause like it didn’t happen, cool?

I did not read enough last year. I watched a lot of television shows. I hosted nights in my home for folks to read aloud to each other from books and I did read some really great stuff (oh my Lord, read Blindness by Jose Saremago), but mainly I kept looking at my shelves and shelves of bought and borrowed books and wondering when I was going to read them. I kept wondering too, how to stop myself buying books. The answer came to me part way through the year, when I started pulling books off my shelf and delivering them to my bedside table as if new. Oh look Carlynne! That’s a book there! Isn’t that so cool and exciting?

It worked a bit. But I still kept watching TV shows while playing tetris on my phone and finished the year feeling unmotivated creatively and decidedly syrupy in the brain-tank. Watch me try and change!

The last in the YA Wildwood series by Colin Meloy. Unlike other young adult fiction around this series harkens back to a time when stories were about the hidden worlds we spent years aching to find. Set in modern day Portland (and featuring a duffel coat and Keds wearing heroine who leads a revolution on her pushbike) where a magical wilderness exists invisible to normal human eyes. The final instalment was every bit as charming, surprisingly funny and full of unassuming yet very relatable characters (a lot of whom are talking animals). This chapter in the Wildwood saga saw the fight for the wildwood extend to Portland and the world beyond, but I couldn’t help but feel like as a finish to this winsome and transporting series it was a little rushed. I do still highly recommend these three for youngins and actually all those who remember gazing into the underbrush at the back of your house and feeling the longing for some friendly eyed beast to take you by the hand and lead you into a world enchanting as something nearly tangible. Seven stars.

I had been twitching and mooning about this novel for months before reading. Anyone who has heard me talk at all has probably heard me dreamily affirm author Marilynne Robinson as one of the world’s greatest living novelists, an opinion I share with the Sunday Mail (quoted on the cover). Her latest novel is set in the same small American town as her previous two, Gilead, but is this time from the perspective of Lila, the softly spoken wife of Reverend John Ames. We know her from Gilead the novel, but not well. We know of the Reverend’s love for her and of her mysterious prior life and of her being much younger than her husband but not a lot else. Lila takes place at her entrance into Gilead as an itinerant drifter, chronicling her meeting of and marriage to Ames but flitting into and out of sharp recollections of Lila’s past beginning with her abduction/emancipation from her parents as a very neglected child.

Once again Robinson’s prose leaves me nearly speechless, or at least very aware of the soft and elegant way she has of carrying you through someone else’s journey, someone who now seems as real if not realer to me than people I have known for years. I ate this book altogether. I was consumed and read it basically all in one day- which for the record is not the way one should read this author- expedited by the form of the novel, in which there are no chapter breaks whatsoever. To read it is to be inside Lila’s grave, wild and rare mind, to walk where she walks, to slide painfully into the past while trying not to fall down in the present. To try to make peace with a God who was unknown to her in her time in the wilderness and with a man who she can’t trust but loves almost immediately.

Please read this book. Read all of Marilynne Robinson’s books. Read them slowly, over days and weeks, or read them twice and three times through, but please read them. She makes me want to marry words and devote myself to them for the rest of my life. 8 million.

I had meant to read Margaret Atwood before now, but somehow found myself assuming she would be unapproachable or stale in some way. I think I must have looked over an excerpt in a class at uni and decided she was standoffish. Anyhow, I picked up the Handmaid’s Tale at Jessie’s house one night and am glad I got to finishing it last month. Firstly, on a super creepy note THIS BOOK IS ALSO SET IN A PLACE CALLED GILEAD. WHAT. Secondly, it’s really good. Atwood’s mega-dystopia is a world at war, and dying out. You only catch glimpses of the wider problems plaguing the Republic of New Gilead, as the handmaid who is telling us her story is a very small cog in a tightly wound and controlled machine where women are possessions, prized only for their ability to help repopulate the world. Atwood’s words are kind of brutal- softly beautiful, harsh and despairing all at once. It’s a pretty bleak world but the fragmented humanity still given our heroine- small pieces; a glimpse of a forbidden word, the feeling of movement under restrictive and forbidding garments- are like crumbs you must keep following. Will be reading more Atwood for sure. A+

I have a few feelings about this book. And I think that’s to be expected because it’s like, so so big. Shit. 771 pages man. First off, to have put together a reasonably complicated story spanning around fifteen years with the level of detail, character and plot development Donna Tartt has is pretty damn impressive. I liked the thing most of the way through. I liked Theo all through his sad and complex childhood, found him beleaguered and sweet and understandably consumed in the chief problem of his life- a painting of a goldfinch. The people Theo meets are real people, who you love or hate in turns. Even the doormen at the apartment building he shared with his mother are so vivid you feel like you know what they’re like at home and are halfway to imagining another story where they are the protagonists. Theo’s likability fades considerably about two thirds of the way through at the jump to his mid-twenties. His problems say a lot about what happens to an unsupervised and understood kid left alone and grieving at a key point in his life, but this failed to keep me interested. I just wanted him to allow his friend (and saviour, in a lot of ways), the delightful and charming Hobie the benefit of trusting him with his whole complicated mess but Theo is at this point so stuck in himself he can’t see his way to do much right at all. I should say here that I like the literary style for the most part, up until this point. It was really immersive and quite moving and lovely in points but I just got sick of it all. By the last chapter- a largely sentimental mush of thought and observation that seemed out of place and barely cogent- I just really needed to not be reading about this guy anymore. Basically, I think this story could have been told in half the time. This amount of detail needs to lead somewhere more concrete than I feel Tartt got to. But what do I know. Maybe I missed the point in my quest to just… bloody… finish. She apparently won the Pulitzer prize for literature, so- who you going to believe? I give this two old rugs and an ok looking lamp.

Thanks for reading,  I don’t know why anyone would care what I think of books particularly well received ones or ones that everyone has read already, but it’s keeping me off the streets. Stay tuned for more Uninformed Literary Opinions in February!

3 thoughts on “What I read in January”