I know a number of people, people that I respect, who love you. They love to stand in their kitchen and move pans about and find ingredients and look in their pantries and make things for those they love. I’ve always thought that’s fabulous. I love the idea that people can be not lazy. That they can make food for themselves. It amazes me. And some of them really love it. Like, they LOVE it. They want to be with you, Baking, a lot of the time. Your sometimes painstaking methods seem a sweet price to pay for the result they get.

Not so for me. It’s not always been that I hate to cook. I don’t even think I do. It’s just never occurred to me to like it. I will certainly grab a spatula or wooden spoon and do my half assed duty, but the idea of cooking as something that’s fun to do, of YOU as an interesting way to spend my time has, on occasion, seemed laughable.

I hope this isn’t offensive… It’s not you exactly, it’s just that why would something that seems almost chore-ish be fun for me? Putting flour and salt and other shit together in exacted quantities just doesn’t get me going.

As you may or may not be aware (I’m sure you’re busy with Nigella or Masterchef or something but you may have read my blog..) I decided I wanted to make a pie. I decided this around seven or eight months ago as a part of my quest to do some shit before I turn 30. I have after all, always been a huge fan of pie  -one of your finest works, I think- and the making of one, crust and all, seems like such an insignificant and obvious part of other peoples lives that the lack of any experience making one in my own began to look ridiculous.

The pie making scheme sat latent within me, swallowed by laziness, fear and my super human ability to forget things and be easily distracted for many a moon. Then, one unsuspecting Friday night, at around nine, I began to think. I began to think pie thoughts. I began, Baking, to dream pie dreams. We didn’t have a lot of fruit, so I googled pear pie recipes lazily, still not entirely committed to the revolution.

I found one. It looked good. I sat, and read it and thought and read it some more and then, when my self esteem thought all hope was lost I said “fuck it, I’m doing this” got off the couch, took my place in the kitchen and, may I say, my place in history. 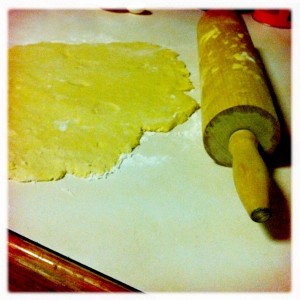 First, as you will know, I made the crust. I took the crust part of another recipe as the one I found was all American and saying things like Wholewheat Flour and stuff. I hoped the recipe wouldn’t know I cheated. The dough freaked me out when I took it out of the food processor as it was a little wet and greasy. Convinced that I had fucked even that small a part, I divided it in two and put it in the fridge to set. Or whatever.

Next! The filling. Several sloppy pears dripping all over the bench later, 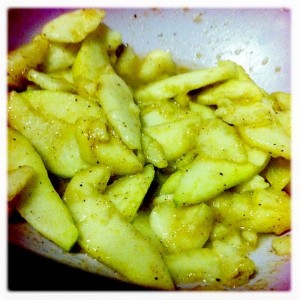 I know, right? Nutmeg and cinnamon and honey dude. Damn.

So. Once this was done and after a few minor interruptions in the way of facebook chat and freaking out a little more over the fate of the ill-begotten crust, it was time to like, assemble this sucker. 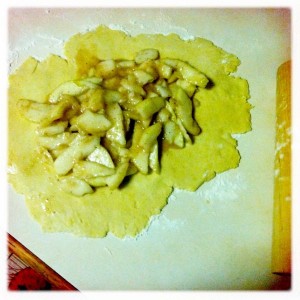 Here is where the trouble started. I placed the pear mix in the middle of my very nicely rolled (I thought) pastry. I began to pull the edges of the pastry over the pear to form a little tart case thing. But woe! The pastry was too thin and the pear too juicy and small cracks began to form in the newly soaking dough. I would smoosh one crevice together only to catch another forming on the other side. It stuck to the bench and looked unlikely to ever make it into the oven. Somehow though, the lumpy pear boat was placed hastily on a tray to await fate and my surrender to inadequacy. 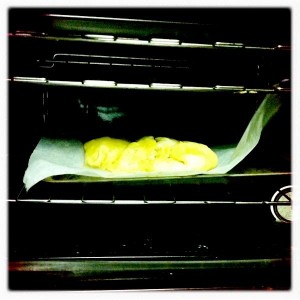 I moaned aloud, I told friends on facebook this was sure to result in horror, I lamented my danged decisions to attempt anything ever as the little pear boat waited for me like an unassuming time bomb of floury doom.

Something peculiar happened. When repeatedly checking the pie, I noticed it had begun to look..golden-ie. Sort of baked and delicious. It looked, dare I say it, edible.

Not letting myself dare to hope, I paced the kitchen some more and then… 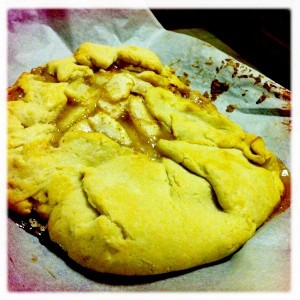 … it was born. My first pie. And I cut into it, and I ate it, and Baking my friend, it was good. The crust was crumbly and baked through and not dry and the pear was succulent. I was exultant. Where there had been no baked good, I had made baked goods.

And now here I stand, on the other side of my great adventure, humbly asking for your forgiveness. I’m sorry I thought you were naff, Baking. You gave me pie and for that I will be forever grateful. I now look forward, almost, to spontaneously deciding to try you late at night again, and possibly at other times when we might combine to make other pies.

Here’s to a long and healthy friendship,

1 thought on “Dear Baking, Sorry we’ve not been friends.”