I know this comes as a shock, but that doesn’t change the fact that I am awkwardly side stepping out of my twenties now, something I’d so infrequently thought about when reading the Babysitters Club or fatting my way through high school. I’m courting age, something that is outside of my control, moving stubbornly alongside me (or standing stock still as I run in stupid meaningless circles around it, depending on your perspective) stuck to my skin like a fungus (ew?). It’s a hand perpetually on my arm, blah blah blah, ooh inevitability, blah blah, happening to us all blah bliddy blah.

It’s the circle of life blah.

But- despite the continuous and unpermissioned propelling toward my grave, my adult self has, in an alarming display of self sabotage, largely refused to play and is sullenly sitting in a tree house, batting half dressed barbie’s heads together and muttering about how “it’s a dumb game anyway”.

I grow older, but not up. While I inhabit the body of a 29 year old, my old skool, puerile habits rear their heads with shocking frequency. Honestly if they continue to just let people grow older without any sort of standardised testing, there’s really no one to blame but the system.

Here’s what I mean.

Boys, though. Like, why, when all other women over 25 started dating bankers and marrying and having children I completely missed the memo and thus am still mooning about, glaring at my phone, whining to my friends about how I just don’t knoooow and giggling over text messages, is of course beyond me. And, how many 21-23 year olds can I possibly meet, you know? A constant parade of kontiki aged males who go to uni and maybe shave a bit does not a mature, Austin-esque heroine make.

I will continue to giggle inappropriately

This guy in one of my classes last semester would insist on pointing out the surname of another girl in the class which was, unfortunately, Wang. I wanted to tell him to stop and that it was not cool, man, but I had to wait till I stopped snickering like a child first.

Seriously. Who’s idea was this? I’m not like, endangering anyone, and some days I actually feel like I’m doing it well, but just the whole “do the things when they need to be done”, “best attend to those emails now”, “Oh I’ve got another meeting that night” thing is something that’s taking a lot of getting used to. It’s odd for a girl who’s used to filling her hours with a variety of dalliances with a variety of characters from a variety of fictional media and the assembling of an occasional sandwich. Very odd.

I will continue to throw my money away

I just love to spend money! Or more accurately, I just don’t care. I’ll just spend it. I shouldn’t go to brunch again, but I will, because I don’t care. I shouldn’t buy another stack of paperbacks from the second hand book store but I will, because I don’t care. I shouldn’t use my phone as a modem without pausing to think about the cost and then end up paying a $1300 bill. Whoops. Other people I’ve heard of or read about, they keep some of their money all together in a pile of some sort and sort of, save it, if you will. From the spending. Heroes.

I gave up sugar for about two months. Then I started eating it again because my life is infinitely better when I can have the odd chocolate bar, gob stopper and bowl of vaguely sweetened breakfast cereal. I don’t know if I’m supposed to stop liking junk food at some point and move on to just nibbling daintily on olives and pesto or whatever but I just can’t see how that will happen without some sort of combined tongue/brain transplant. Presumably when I’m 40 I’ll get the package containing my new tastes in fashion, television and food along with my Opinions and Responsibility that got sent to the wrong address about five years ago. Then I’ll eat it.

And I will continue to HATE homework

Because it suuuuuucks sooo harrrd. I don’t WANT to research. And everyone knows it’s lame and whose idea was this anyway and no one ever says to smart people “prove you’re good by making a totally sweet sandwich or playlist” so how is it faaaair? Huff.

Just wanted to get this all registered (you know, on the internet) before I’m actually a 30 year old. Ludicrous.

If you need me I’ll be under my blankets sniffling and moaning.

While a lot of the TV I watched when I was younger has become part of the fuzzy clothes dryer of my brain, half remembered bits of twins? something about destiny? something about medallions? and gold? all flying around together and moulding into an indistinguishable mass, some has stuck in there, clear as day. I can still remember Penny in her green pants and sturdy sneakers opening her computer book (computer book! I KNOW, right?!) and Vanilla Icing the hell out of Inspector G’s problems, I remember wanting to date Michealangelo SO HARD (though now I’m more into Raphael, I feel like he gets me) and having no small amount of envy for April O’neills yellow jumpsuit. Oh man. She was the straight up- COOLEST.

I also remember digging on Sesame street, something that hasn’t changed a lot.

I always loved the street more than the school (it seems to be one or the other, a sort of Home and Away v Neighbors polemic). Playschool was adults talking to kids, taking time out of their busy days to condescend to me, whereas Sesame Street was friends (my friends, the crazy ass monsters) talking to friends.

I don’t remember if there was a character I resonated with more than any other, I just remember enjoying the hell out of it. And the ladybug picnic.  As I have grown older, someone stuck with me, grew sharper and more focussed through the haze of my childhood and has taken his place as my favorite from the street. 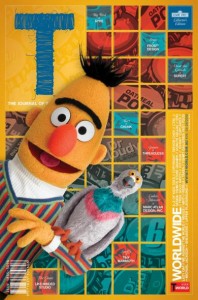 I have a crush on Bert. My mono-browed, skivvy wearing hero. Sure he’s oft overshadowed by his more fun, more imaginative, more easy going bud Ernie, but in Bert I’ve sensed something worth noticing, worth celebrating. When I picked up the above issue of T-WORLD magazine I realized what it was that kept me coming back** to an oval-nosed paper clip obsessed freak.

There was this article celebrating Sesame Street and they got several different artists to create original designs based on their favorite characters. The one that did Berts wrote that Bert was the guy that told us it was ok to not be the life of the party.

Everyone knows that Ernie is more likeable. He is fun and silly and innocent and joyful where Bert is dour, boring, practical and snappy. But everyone also knows you can’t always be Ernie. Sometimes you need to be practical. Sometimes you’re sleepy. Sometimes your room mate is talking to an invisible person on a banana and it plain shits you off.

What is wonderful about this skinny little man-puppet (aside from his love of pigeons, which is something we have in common) is that he offers an alternative to the go go go crowd pleasing of the other residents and permissions kids (and 28 yr olds) to be proud of their face eatingly boring habits, eg bottle cap collecting, their lack of constant childlike joy and their visionary dance moves (pigeon dance anyone?).

There is nothing wrong and in fact a lot that’s right with being an Ernie. I’m not going to knock that kind of lifestyle (tee hee). But I’m voting team Bert, because skivvies are sometimes a practical and stylish wardrobe choice.

*Nothing depreciating or untoward should be read into the title as far as my actual brother goes, he is great and fun and helped foster an understanding of the brilliance of S Street and all other Jim Henson associated media.

**and seriously, coming back cos once when I was travelling I left my Bert doll in Gimmelwald, this town on the side of a mountain in Switzerland. And I took a cable car, a bus and a boat across the country before realising. So then I took a train, a bus and a cable car back to fetch him. No one gets left behind. I’m oddly sentimental about things.

Average is obviously a relative term. One needs something they’ve attempted in some way, something presumably others are more than average at, to try out and to feel like they’ve not done real good at (when compared to aforementioned others).  There are so many things one can be average at, so many levels of done-ness, or aptitude to compare to that for the average connoisseur can be difficult to navigate. This will be my attempt to chart my own mediocrity in all its wonder, an examination of why it is we feel the need to excel, and a celebration of the many, many things that I am average at and hopefully a journey into more.

Can you dig it?